CT scanners sometimes end up in remote areas of a developing nation, due to the ambitions of its government, the donations of well-meaning foreign philanthropists, or the tireless activity of vendor representatives. But unless those machines come with someone to operate and maintain them, and someone to interpret the images, they don’t benefit the population they were meant to serve.

At this year’s International Trends meeting, held during RSNA 2013, a gathering of the world’s radiology leaders discussed how to sync up the radiology education needs of developing nations with the resources of the developed ones.

“There is a huge need for education in those regions where the technology is coming very fast,” said Richard Baron, M.D., professor of radiology at the University of Chicago, 2014 RSNA Board Chairman, previously the Liaison for International Affairs, and co-chair of the RSNA 2013 International Trends meeting focusing on radiology education in developing nations. “The Internet lets them read about the latest imaging technology, economic development lets them buy it. In many ways we’ve been handing out loaves of bread and we have to teach them how to cook.”

Dramatic changes in radiology education are needed to bring adequate capabilities to developing nations. Meeting speakers focused on the needs of developing nations and the resources available in developed nations, and how the two might be aligned. “No one has taken a step back to look at the library of opportunities out there, or to ask whether we’re duplicating efforts,” Dr. Baron said. “Do we have five teams going to the same small town while we ignore other areas? Do we know that the techniques we use to teach in the U.S. or Europe will work well in these countries? Have we asked them what they want?”

Dr. Baron observed that a developing country might have needs at several levels. “We send people to the capital cities to talk about CT or MR because the leadership in that country wants the technology, but 50 miles out, they need help using plain film radiography and maybe ultrasound,” he said.

Gloria Soto, M.D., of Chile, president of the Interamerican College of Radiology, cautioned against regarding the “developing world” as a monolith. “Five billion people live in ‘developing nations,’ or 80 to 85 percent of the world population, and somewhere between 104 and 152 countries, out of 206, are developing or underdeveloped, depending on the definition,” she said. “They are not homogeneous. There are great differences in their infrastructure, their technologies, their work forces, their national policies. Any educational programs must be focused to specific needs and support local conditions.”

“We are a Piece in the Puzzle of Medical Care”

Presentations by speakers from developed areas made clear that every professional society already offers a variety of activities to help radiologists from less developed countries. Those include sending visiting professors to the countries, sponsoring fellowships for radiologists in training to study abroad and providing educational materials online.

The impact of these efforts is unclear, however said International Advisory Committee member Gabriel P. Krestin, M.D., Ph.D., of the Netherlands. “The needs of developing countries 10 to 15 years ago are the same as their needs today,” said Dr. Krestin. “I’m convinced that many young people profited a lot from outreach efforts, but did we change anything in those countries or those regions? I don’t know if coordination would be helpful, because it might just add bureaucracy, but we should have unified metrics so we can measure what we’re providing.”

William Mayo-Smith, M.D., of Brown University, urged attendees to consider not only radiology societies, but also other medical specialty societies, hospitals and other institutions, non-government organizations and even individuals when trying to determine how best to organize outreach. “We must realize that we are a piece in the puzzle of medical care,” he said.

Teresita Angtuaco, M.D., of the U.S., a member of RSNA’s International Advisory Committee, observed that professional organizations can work very effectively by taking local power structures into account. She recounted how the committee was able to reshape radiology residency programs in Thailand, creating separate training tracks for diagnostic and interventional radiologists. “An elite group in Thailand makes all those decisions, and there’s not a lot of red tape or discussion,” she said. “A little influence from an international group can make big changes.”

Speakers from several developing countries presented the current state of radiology and radiology education in their respective countries.

Sarah Guerra, M.D., representing Peru, said that a third of the country’s population, along with most of its radiology resources, is concentrated in Lima, the capital. There are 400 radiologists in Peru to serve 30 million people and a dire need exists for more visiting professionals and more standardization of radiology curricula.

Though itself a developing country, Tunisia also helps spread radiology training and services throughout less developed countries of Africa. While those countries can benefit from the many resources provided online by international radiology societies, Dr. Gharbi said in-person instruction is needed. “There are limits to virtual learning,” he said. “Skills are taught by people using machines.”

The RSNA 2013 International Trends meeting was a summit of radiologists discussing radiology education in developing nations. 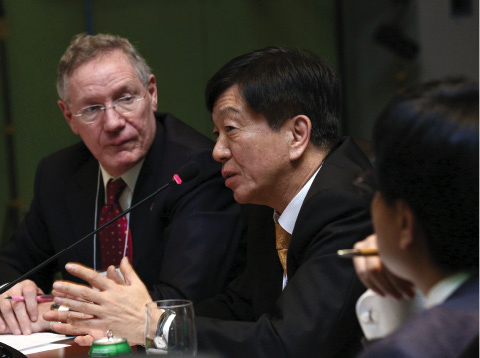 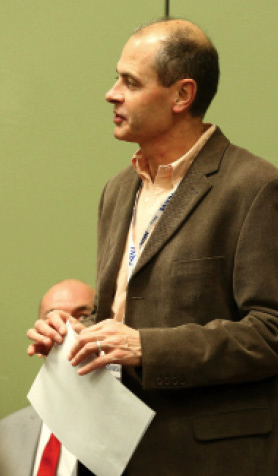 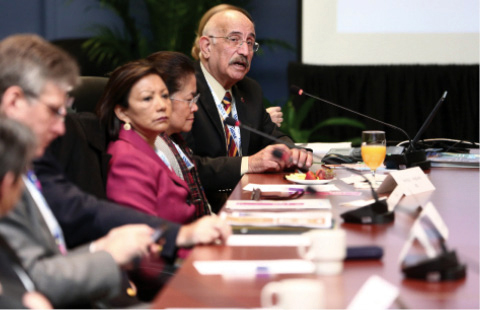 A gathering of the world’s radiology leaders discussed solutions for spreading radiology training, technology and education through developing countries. For example, there are 400 radiologists to serve the 30 million people in Peru, creating a dire need for visiting professionals and standardization of radiology curricula.
Editor's Picks