Radiology residents experience similar or higher levels of job-related stress than their peers in other medical specialties according to recent research that shows a strong connection between resident burnout and financial worries.

Researchers in the Department of Radiology at the University of Washington, Seattle, demonstrated that 53 percent of trainees surveyed experienced symptoms of stress at least weekly, while 49 percent had feelings of depersonalization at least weekly, according to results of the study published in the May 2013 issue of Academic Radiology. In terms of finances, results indicate that attitudes about money are closely related to overall emotional wellness, rather than objective appraisals such as debt level or household income level, said Michael F. McNeeley, M.D., lead author of the study.

Compounding the problem, many residents go into radiology thinking it will be less intense than it actually is, said Dr. McNeeley, a fellow in the university’s radiology department.

“There is a myth that radiology is a ‘lifestyle’ specialty with relatively high compensation, a relatively light workload, and relatively low intensity from a patient-care standpoint,” Dr. McNeeley said. “Although those of us in the field recognize that myth to be nonsense, the lingering myth of the ‘radiholiday’ has fueled a misperception that radiology residency is a vacation-like experience, when in reality it’s a tough job that requires a lot of grit.”

Researchers sent an electronic survey to all 1,389 resident and junior members of the Association of University Radiologists (AUR). Of those, 226 (19 percent) responded. Researchers used a modified Maslach Burnout Index (MBI)—a standard research method for identifying burnout in health professionals—to evaluate feedback. Overall quality of life was evaluated based on a single item self-assessment on a scale of 1-5.

Researchers discovered that 38 percent of respondents rated their overall quality of life as “generally bad” or “neutral,” which is likely related to the ‘radiholiday’ misperception many have about radiology, Dr. McNeeley said. Early in their careers, trainees can become overwhelmed by the vast amount of new information they must learn and new technology they must master. As training continues, the nature of stress changes as they begin to apply this new knowledge with increasing efficiency and independence.

“That can be a difficult adjustment,” Dr. McNeeley said. “Make no mistake—these are extremely important experiences. This is a time when a trainee forges his or her identity as a clinical imager and develops his or her professional self-confidence, but it certainly isn’t an easy or stress-free process.”

The study showed that 42 percent (112 of 266) of the respondents felt that their personal finances made it somewhat difficult to pay for mandatory work-related expenses, such as American Board of Radiology dues and licensing fees. Purchasing other work-related items such as textbooks was at least somewhat difficult for 52 percent (139) based on financial constraints.

“Finances may be an underappreciated influence on resident burnout, and subjective feelings of financial scarcity could outweigh the impact of objective indebtedness,” Dr. McNeeley said.

Moonlighting was one way respondents mitigated their stress level. Those who had moonlighted within the previous 30 days of the survey reported a higher level of personal achievement and lower levels of emotional exhaustion.

“Choosing to pursue a long training pathway, I have been stressed at times thinking that I may not be adequately providing for my family financially with a resident stipend,” said the study’s co-author Francisco A. Perez, M.D., Ph.D., a neuroradiology fellow in the university’s radiology department.

“The opportunity to apply my radiology training through moonlighting opportunities has helped me to reduce this anxiety. Moonlighting not only helps to pay the bills, it reinforces that my training is valuable and worthwhile.”

Dr. Perez added that seeking opportunities to interact with patients has reduced burnout by helping him reaffirm his purpose as he strives to be a “compassionate radiologist.”

Dr. McNeeley, who credited the University of Washington for making his trainee period as stress-free as possible, says other healthcare leaders can help trainees through this process by making sure resident time commitments are structured and meaningful, reinforcing the social interactions of residents and their families, making sure they are treated as valued members of the department and instilling a sense of purpose in them.

“All of these gestures go a long way toward mitigating burnout,” Dr. McNeeley said. “Residents have to see beyond the worklist to truly feel their worth.”

In fact, finding ways to reduce stress was a major impetus for the study, Dr. Perez added.

“The hope was that survey results could be used to develop and implement evidence-based initiatives to reduce resident burnout and improve resident happiness in radiology residency programs across the country,” he said.

Residents From Around the World Share Secrets for Battling Stress

“I listen to music, whatever is on my Spotify list,” said Rudi Barua, M.D., a fourth year resident at Jacobi Medical Center in New York City. “That’s about it.”

James Zheng, M.D.“I like to sleep,” said James Zheng, M.D., a second-year resident at the Royal University Hospital in Saskatoon, Canada. “I also enjoy yoga and going to the gym.” 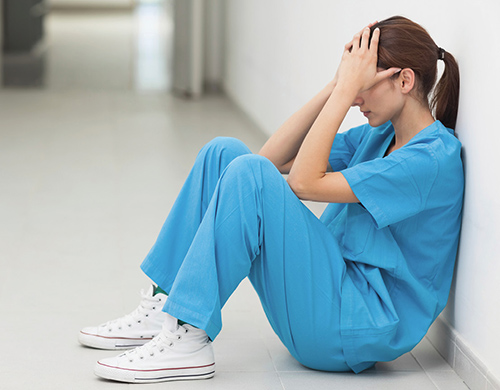 While financial issues played a big role in residents’ overall emotional wellness, according to a recent Academic Radiology study, experts say trainees can reduce stress by making sure time commitments are structured and meaningful, maintaining face-to-face social interaction, staying physically active and cultivating a spiritual life, among other methods.