Use of MR to Identify Brown Fat Could Fuel Obesity Therapies

Use of a novel MR imaging technique to detect the presence of brown fat in humans could help researchers develop therapies to battle obesity and related illnesses including diabetes.

“We’ve demonstrated for the first time that we can use a form of MRI to actually show brown fat (brown adipose tissue, or BAT) and discern it from white fat (white adipose tissue, or WAT),” said Thomas Barber, Ph.D., associate professor of clinical endocrinology and honorary consultant endocrinologist, University of Warwick, University Hospitals Coventry and Warwickshire NHS Trust. “This is the first study that has used MRI to show brown fat in a living human.”

The study by Dr. Barber and colleagues was published in the January 2014 issue of the Journal of Clinical Endocrinology and Metabolism.

White fat has been associated with weight gain, while brown fat helps regulate body weight due to its ability to use energy and burn calories. “If you have a sugar cube size of brown fat, and activate it for a year, you could burn through three or four kilograms of white fat in that time,” Dr. Barber said. “You don’t need a lot of brown fat to have a very attractive method of producing weight loss.”

According to Dr. Barber, the study of brown fat was “revolutionized” five years ago with the publication of a study in the New England Journal of Medicine by Wouter D. van Marken Lichtenbelt, Ph.D., and colleagues, who determined that “the amount of brown adipose tissue is inversely correlated with body mass index, especially in older people, suggesting a potential role of brown adipose tissue in adult human metabolism."

Brown fat was previously thought to be relevant only in small mammals and infants. “This, therefore, opened the possibility for further study of brown fat in human adults and potentialtherapeutic avenues,” Dr. Barber said.

Until recently, PET/CT had been the standard approach for assessing brown fat tissue in adult humans, but that modality is limited in determining how many adults have brown fat and, if so, how much fat each adult possesses. “PET allows detection of BAT in vivo, but is hampered by various factors including the requirement that the BAT be metabolically active in order for the radiotracer to be taken up,” said study author Terrance Jones, Ph.D., a clinical research fellow in radiology at the University of Warwick.

For those reasons, PET/CT is not very useful in determining the prevalence of BAT in adult humans. For example, Dr. Barber cited some PET/CT studies showing that brown fat is found in just 5 to 10 percent of subjects, and others involving multiple scans that point to a presence brown fat in as many as 50 percent of subjects. “With PET/CT, the question is how many of us have brown fat tissue,” Dr. Barber said. “We don’t really know the answer. It could be that all of us have some brown fat; it could be that a minority of us do.”

Knowing the answers to these questions could be of great value, Dr. Barber said, as they could affect research on brown fat-related therapies used to battle obesity.

Researchers found that MR imaging has imporant advantages over PET/CT. Along with having no ionizing radiation, MR imaging provides superior spatial resolution, which could potentially allow for identification of small brown fat deposits, Dr. Jones said. MR imaging can also differentiate between BAT and WAT based on the difference in water content between the two tissue types, allowing researchers to identify both active and inactive brown fat. PET/CT only identifies brown fat when it is active.

“Identifying BAT using MR has capitalized on the biochemical and morphological differences between BAT and WAT,” Dr. Jones said. The application of iterative decomposition of water and fat with echo asymmetry and least-squares

estimation (IDEAL) enables MR imaging to distinguish between BAT and WAT, as shown in previous studies.

In the team’s proof-of-concept study, they visually identified BAT on anatomical fat-only spin-echo MR images in a single adult with a large volume of BAT. They reported moderate inter- observer variability and provided PET/CT, histological and immunohistochemical confirmation. “When applied to a wider sample, visual identification tended to underestimate BAT on MR compared with PET/CT,” Dr. Jones said. “However MRI has the advantage of being able to acquire multiple data points in experiments where precise estimation of BAT volume is required.”

It is noteworthy that the proof-of-concept study was performed on a subject who happened to have an abundance of active brown fat that appeared on the original PET/CT, which was performed for clinical reasons, Dr. Barber said. “This needs to be tested on many more subjects so we can examine its reproducibility, its reliability and validate some of the findings we showed in the original study,” he said.

The ultimate aim of the research is to identify a way of quantifying BAT so that it can be used to assess the efficacy of future therapies based on brown fat and to shed light on the nature of brown fat itself. 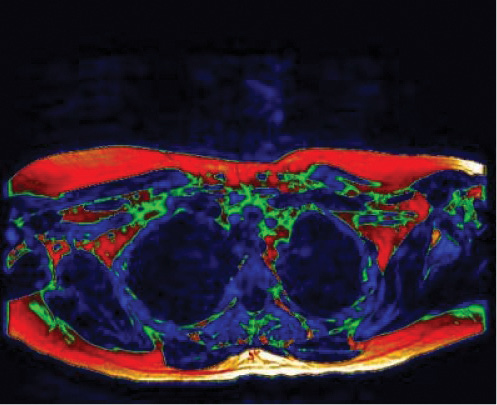 The first MR imaging study to show “brown fat” in a living adult could be an essential step towards new therapies to aid the fight against obesity. Above: a digitally-enhanced axial MR image of the upper chest (as if viewed from the feet). Areas of potential brown fat are shown in green. Image courtesy of the University Hospitals Coventry and Warwickshire and Terrance Jones, Ph.D.

Access the study, “Identification of Brown Adipose Tissue Using MR Imaging in a Human Adult with Histological and Immunohistochemical Confirmation,” in the Journal of Clinical Endocrinology & Metabolism at press.endocrine.org/journal/jcem.