Salaries for radiologists increased substantially in 2013, reversing a recent trend in which compensation levels flatlined or even decreased

Salaries for both diagnostic and interventional radiologists increased substantially in 2013, reversing a trend in which compensation levels flatlined or even decreased in the past few years.

Yet, according to the 2014 American Medical Group Association (AMGA) 27th Annual Medical Group Compensation and Financial Survey, relative value unit (RVU) rates— the primary measure of a physician’s productivity—increased at an even higher rate than compensation, potentially offsetting the gains in yearly salaries.

AMGA mailed the survey questionnaire to groups across the country in January of 2014 and received responses from 289 medical groups, representing approximately 73,700 providers. Survey results showed that the median compensation level in 2013 for non-interventional radiologists increased by 5 percent over the previous year, from $453,216 to $476,013. Interventional radiologists received a smaller—yet still healthy—increase of 2.7 percent, from $504,772 to $518,164.

“I consider both of these increases to be fairly good considering that one or the other had decreases over the last couple of years,” said Brad Vaudrey, M.B.A, C.P.A., principal at Sullivan, Cotter & Associates, Inc., which administered the survey.

Overall, 68 percent of the 30 physician specialties in the survey saw increases in compensation in 2013. Specialties with bigger increases than radiology (non-interventional) were gastroenterology (9 percent), cardiac/thoracic surgery (8.2 percent), emergency medicine (5.2 percent) and neurology (5.1 percent).

Nevertheless, Vaudrey said that any enthusiasm about the compensation increase should be tempered by the increase in work RVUs for non-interventional and interventional radiologists.

RVUs are based on the value assigned to each Current Procedural Terminology (CPT) code through the resource-based relative value scale used partially by Medicare and nearly all health maintenance organizations. Reimbursement by the Centers for Medicare & Medicaid Services (CMS) is based on the RVU system.

“Both of those radiology RVU numbers are notable,” Vaudrey said. “You don’t typically see numbers like that unless there is some kind of change from CMS, and we really didn’t see anything that would cause that kind of increase.”

“My perception in talking to radiologists in both academic and private practice is that they are working harder,” said David Yousem, M.D., M.B.A., a professor in the Department of Radiology, vice-chair of program development and director of neuroradiology at Johns Hopkins Hospital in Baltimore, and a nationally recognized expert in radiology economics. “I guess I’m gratified to see they are getting paid slightly higher rates for that extra hard work.”

Another factor impacting radiology is the recent change to Multiple Procedure Payment Reduction (MPPR) as applied to RVUs. When first implemented in 2006, the MPPR applied only to the technical component of contiguous advanced imaging studies performed on the same patient, on the same day. In 2011, CMS changed the MPPR to include non-contiguous body parts, across different modalities and in 2012 expanded the MPPR to include a cut to the professional component as well.

Applying the MPPR to the professional component has created a significant reduction in RVUs because radiologists often scan multiple body parts—particularly with MR or CT exams. “Radiologists are still gaining in RVUs despite the fact that CMS implemented this multiple procedure payment reduction, which suggests they are working even harder,” Dr. Yousem said.

Along with the increase in work RVUs, a change in the payer mix may also be impacting compensation, Dr. Yousem said. For example, lower unemployment rates could mean that more people are covered by private insurers who pay more than Medicare or Medicaid. Or, he speculated, practice expenses could be falling due to factors such as the implementation of voice recognition software (which can reduce transcription costs), that can help increase compensation. “But I think the major explanation is the increase in RVUs,” he said.

Vaudrey noted that the work RVU increases experienced by both diagnostic and interventional radiologists are “very uncommon” and he doesn’t expect to see them repeated in 2014. “I think you can only do so much in terms of increased work effort,” he said. “I think we’ll see a much flatter work effort level and probably the same for compensation.”

Added Donald W. Fisher, Ph.D., CAE, AMGA’s president and chief executive officer, “Although the RVU increase in radiology may be an anomaly, I think we may see other shifts in RVUs—up and down—in many, different specialties in the coming years,” Dr. Fisher said. “As more groups move to value-based payment in CMS programs and arrangements with commercial insurers, they will increasingly bear more risk for keeping patients healthy and decreasing ED visits and hospital stays. All specialties, including radiology, will be part of a team-based care approach, which is essential to successfully managing population health, so groups will be figuring out how to more efficiently deliver quality patient care.” 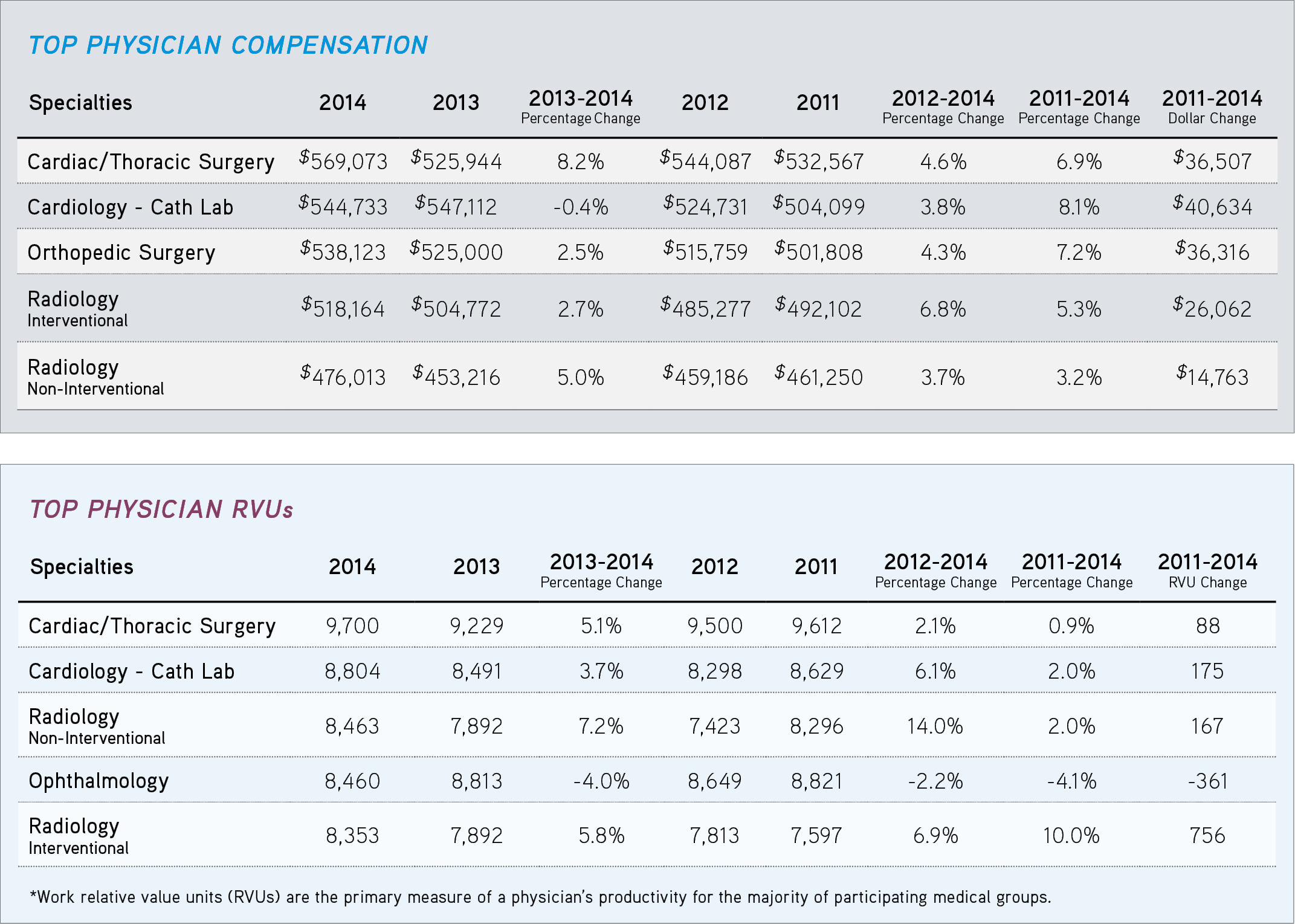