Researchers using functional MR imaging (fMRI) have detected neural networks in the spinal cord similar to those that exist in the brain, opening the door for improved understanding of spinal cord injuries and neurological diseases such as multiple sclerosis (MS).

The brain’s resting state network—which is active when a person is not focused on a specific task—was discovered approximately 20 years ago and has been the frequent focus of research in recent years. Disruptions in this network have been associated with a number of disorders as well as with memory decline related to aging.

Confirmation of a similar network in the spinal cord has been a significant challenge, according to Robert Barry, Ph.D., a postdoctoral research fellow at the Vanderbilt University Institute of Imaging Science in Nashville. “Researchers are trying to image a structure that’s 12 to 15 millimeters across and is surrounded by the large bones of the spine,” Dr. Barry said. “In addition, the cerebrospinal fluid that surrounds the spinal cord adds noise to the measurement of spinal cord functional connectivity.”

After developing new MR imaging protocols to maximinze some of the pragmatic limitations, Dr. Barry and his Vanderbilt colleagues scanned 22 healthy volunteers with a 7-T MR imaging scanner and multichannel spinal cord coils. Activity in neural circuits was measured using blood-oxygen-level-dependent (BOLD) contrast imaging, a noninvasive technique that is sensitive to changes in the oxygen status of hemoglobin. Areas with increased utilization of oxygen are associated with a transient increase in the level of deoxygenated hemoglobin followed by a larger increase in the level of oxygenated blood to meet the increased energy demands.

“We acquired the images very rapidly—one about every three and-a-half seconds,” said coauthor Seth Smith, Ph.D., an assistant professor of radiology at Vanderbilt. “If we scan for nine minutes then we will acquire 150 volumes that can be utilized to study fluctuations in the BOLD signal which can be related to functional connectivity.”

While the subjects were not performing any task, and in the resting state, the fMRI scans showed functional connectivity between areas of gray matter inside the spinal cord that control motor function and sensory perception. “We were excited to use this technology to demonstrate the existence of resting state networks in the spinal cord,” Dr. Barry said. “Now that we’ve established the feasibility of this technique, we can start asking the harder questions.”

One immediate challenge is to determine if the spinal cord resting state networks are connected to the same networks that exist in the brain. Researchers also hope to find out how these intrinsic resting circuits might be related to neurological disorders affecting spinal cord function. “Our hope is that this work can be translated to address many neurological disorders,” Dr. Barry said.

In the case of MS, researchers could use these techniques at the earliest stages of the disease to determine how lesion occurrences affect neural signaling and ultimately day-to-day function. They hope to collaborate with other researchers to study experimental drugs that might help prevent or stop MS progression. “We might be able to use the progression of these networks as a proxy for the patient getting better,” Dr. Barry said.

Resting state studies with BOLD fMRI have a number of advantages. The studies are noninvasive, the sequences are very safe, and the entire exam takes only 55 to 60 minutes. Patients need only to lie still during the exam, which is particularly important for those who can’t perform certain motor-function tasks.

The technique might also have a role in determining the impact and therapeutic advantage of surgery. For instance, it would be important to capture spinal cord functional integrity in patients where surgery is often considered. An example is for patients who have slipped disks and conventional imaging shows the disk to be in contact with the spinal cord. Assessing the function of the spinal cord pre- and post-surgery would be invaluable for assessing the associated risk across patients with varying degrees of neurological, radiological and clinical disability.

The pre-surgical eavluation scenario is one example of how refined functional techniques could help solve the “clinico- radiological paradox,” a phenomenon in which conventional radiological imaging often proves to be a poor predictor of disease/syndrome activity and in general, the quality of life for patients.

“One person could demonstrate preserved function, yet many spinal lesions are visible on MR imaging; on the other hand, you might have a patient with one lesion who demonstrates significant functional abnormalities,” Dr. Smith said. “We need to find out what causes the spinal cord to gain or lose function and how this relates to a patient’s day-to-day functioning."

The technique also may have a role in predicting recovery for people with traumatic spinal injuries. Such patients are often fitted with metallic stabilization hardware like rods, pins and staples, rendering them unable to have an MR imaging study for the rest of their lives. These patients conceivably could be scanned with the new methods before surgery. “You could do one scan and determine the prognosis for recovery and potentially design therapies to improve that prognosis,” Dr. Smith said.

The Vanderbilt team will be studying these functional techniques in patients with spinal cord injury over the next few years thanks to a National Institutes of Health Pathway to Independence Award.

Going forward, researchers hope to adapt the technique for the more commonly available 3-T MR imaging machines. While 3 T has coils that enable head and neck imaging, its signal-to-noise ratio is significantly decreased compared with 7 T. “The clinical impact of this technique becomes exponential if we can transfer it to a lower field,” Dr. Smith said.

These findings point the way to an exciting new era in the field. “With recent advances in technology, the spinal cord is getting increased attention and more and more clinicians are now focusing on how to use this information," Dr. Smith said.

Researchers have noninvasively measured neural signaling in the spinal cords of healthy human volunteers. Above: Resting state spinal cord fMRI at 7 Tesla. (A) Mid-sagittal slice from a healthy volunteer showing the complete cervical cord and typical axial slice placement for this resting state study. In all subjects the imaging stack was centered on the C3/C4 junction, providing full coverage of C3 and C4 and partial coverage of C2 and C5. (B) T2*-weighted anatomical image at C4 acquired with 0.6 × 0.6 × 4 mm3 voxels and interpolated to 0.31 × 0.31 × 4 mm3. Excellent contrast permits visualization of the characteristic butterfly-shaped gray matter column. (C) A single T2*-weighted functional image of this axial slice (acquired with 0.91 × 0.91 × 4 mm3 voxels). Functional images are high quality with minimal geometric distortions and T2* blurring and permit adequate spatial delineation between white matter and cerebrospinal fluid. Images courtesy eLifesciences. 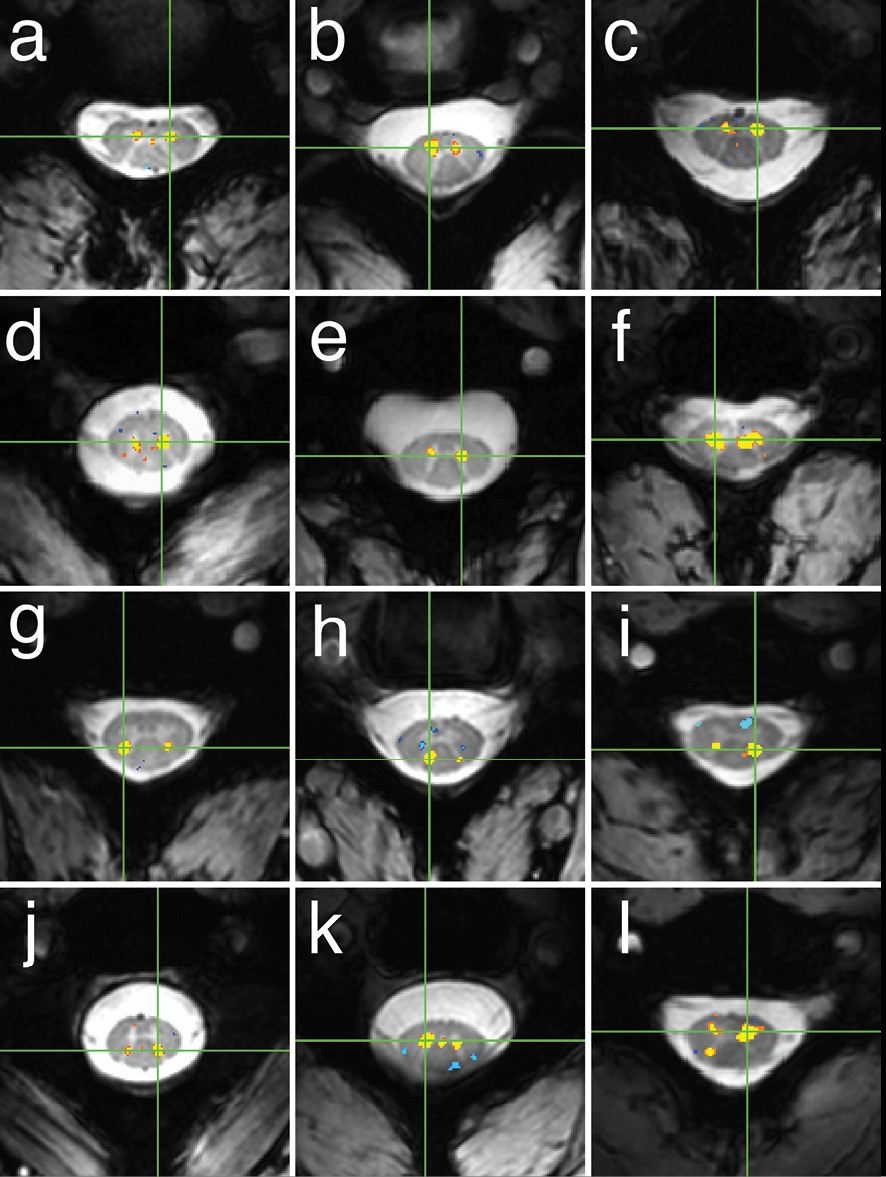 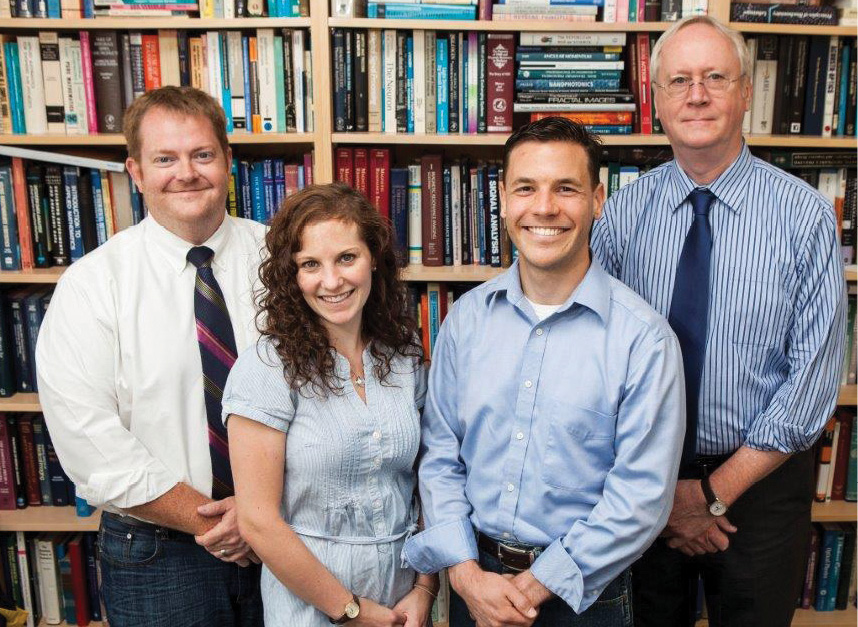