No Need to Delay Mammogram after COVID Vaccine

There should be no delay in screening mammograms after COVID-19 vaccination due to lymphadenopathy, according to a new study published in Radiology. Instead, lymphadenopathy should be interpreted within the context of the individual patient’s risk factors, the researchers said.

When this side effect was first discovered, women were told to delay their mammography exams to avoid unnecessary false positives and follow-ups. However, it soon became apparent that the swelling could take many weeks to resolve.

Therefore, Stacey Wolfson, MD, from the Department of Radiology at New York University Grossman School of Medicine and NYU Langone Health in New York City, and colleagues set out to determine the outcomes of axillary lymphadenopathy after COVID-19 vaccination on breast imaging examinations.

“This is the largest study to evaluate axillary lymphadenopathy after COVID-19 vaccination, with long term follow-up data,” Dr. Wolfson said. “This is important because it gives us further insight as to the natural behavior of this reactive lymphadenopathy and allows us to make broader guidelines regarding follow-up.” 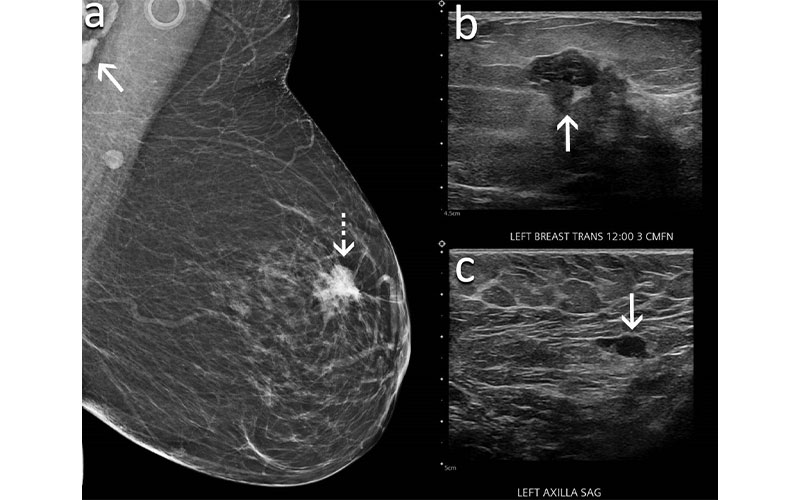 A 60-year-old woman presents for screening mammography nine weeks after receiving her second dose of the Moderna COVID-19 vaccine. (A) Mediolateral oblique view of the left breast demonstrates an irregular mass in the superior left breast (dash arrow) and a dense lymph node in the left axilla that is incompletely visualized (arrow). Sonography demonstrates (B) an irregular hypoechoic mass in the breast (arrow) that corresponded to the mammographic finding and (C) a lymph node with eccentric cortical thickening measuring 6 mm (arrow) in the axilla. Biopsy of the mass yielded invasive ductal carcinoma and biopsy of the lymph node yielded metastatic carcinoma.

The researchers identified patients who received the COVID-19 vaccine and had breast imaging between Dec. 30, 2020, and Apr. 12, 2021, at 17 sites across one institution. Follow-up exams were recorded through Dec. 10, 2021. The research team analyzed clinical data and vaccine information from the medical records, and only patients with complete information were included.

“Other studies with lower reported incidence of lymphadenopathy are based on self-reported symptoms or detection solely on mammography. In contrast, our study had an incidence of 44%,” Dr. Wolfson said.

“I was surprised by how quickly the lymph nodes became swollen and how long they persisted after being detected on routine screening mammogram and screening ultrasound exams,” Dr. Wolfson said. “We found benign reactive lymph nodes were still present despite delaying the screening exams for four to six weeks based on various guidelines. These lymph nodes were unchanged with follow up exams at three months, and some enlarged lymph nodes persisted for over 10 months.”

Eight percent (43/537) of patients with lymphadenopathy underwent a biopsy. Among them, 34 (79%) had benign results and nine (21%) had malignant results. Four patients were diagnosed with metastatic breast cancer. The patients with metastatic cancer all had suspicious concurrent mammographic findings in the ipsilateral breast.

Three hundred eighty-seven (72%) patients with lymphadenopathy had 407 follow-up examinations, averaging 15.7 weeks after the initial examinations. On follow-up imaging, 323 of 407 (79.4%) exams were assessed as benign and 84 (20.6%) were assessed as probably benign with recommendation to undergo additional follow-up. No patients in the follow-up group were diagnosed with a subsequent malignancy.

“These findings allow us to make broader guidelines suggesting that short-term follow-up imaging is not recommended,” Dr. Wolfson said. “We found only nine cancerous lymph nodes in our study, and they were only found in women with known cancer, concurrent suspicious findings in the breast, and/or contralateral axilla.”

Based on the findings, the researchers concluded that there should be no delay in screening mammograms because of recent COVID-19 vaccination and lymphadenopathy should be interpreted in the context of patient risk factors with vigilance in patients with concurrent suspicious mammographic findings in the ipsilateral breast.

“It is important for people to know that they should not delay their screening mammograms due to recent vaccination. Reactive lymphadenopathy is common after COVID-19 vaccination — and benign,” Dr. Wolfson said.