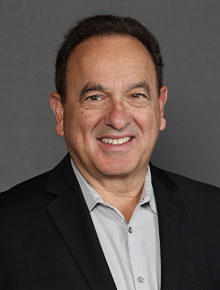 Bruce G. Haffty, MD, is president of the Radiological Society of North America (RSNA) Board of Directors.

Dr. Haffty completed his medical school and residency training at Yale University School of Medicine in 1988 and spent the next 18 years specializing in breast, head and neck cancers in Yale’s Department of Therapeutic Radiology. He served on the faculty at Yale from 1988 through 2005. Dr. Haffty was promoted to professor of therapeutic radiology in 2000, served as residency program director from 1992 through 2004, and as vice chairman and clinical director from 2002 to 2005.

As president, Dr. Haffty will focus on expanding RSNA’s profile in the broader medical community, collaborating with other major medical societies and governmental agencies in promoting the value of the radiological sciences to patients and partners in health care delivery.

“I am humbled and honored to serve as RSNA president for the coming year,” Dr. Haffty said. “As a radiation oncologist, I appreciate the value of imaging to my daily practice and routinely witness the importance patients and their multidisciplinary care team place on imaging in their journey through the diagnosis, treatment and follow-up of their cancer care. This next year will revolve around the value and empowerment of imaging to our patients and collaborating physicians, and I look forward to a productive and exciting year.”

Dr. Haffty has authored or co-authored 50 books, book chapters and theses, more than 400 peer-reviewed articles and numerous editorials, commentaries and letters. Dr. Haffty is a leader in national clinical trials and is currently co-investigator on several national clinical trials through the NRG Oncology and Alliance for Clinical Trials in Oncology cooperative groups. He has given many scientific research presentations nationally and internationally, and has been an invited lecturer or visiting professor at nearly 180 institutions and meetings worldwide.

Through his extensive work with the American Society for Radiation Oncology, Dr. Haffty served as the founding president of the Association of Directors of Radiation Oncology Programs (ADROP) in 2000, providing tools and resources to advance the quality of residency training and education in radiation oncology. He served as ADROP president from 2000 to 2003.

In addition to editing the comprehensive Handbook of Radiation Oncology, Dr. Haffty has served on numerous editorial boards, such as The Cancer Journal, International Journal Radiation Oncology - Biology - Physics, Clinical Cancer Research, Journal of Clinical Oncology, Cancer Therapeutics, Women’s Oncology Review, Radiation Oncology Investigations, Oncology Reports and Breast Diseases: A Year Book Quarterly. Dr. Haffty also serves as a frequent reviewer for The Journal of the National Cancer Institute, Cancer, Lancet, and others. He currently serves as deputy editor of the Journal of Clinical Oncology. Dr. Haffty served on the RSNA News editorial board from 2009 to 2015.

Dr. Haffty has volunteered with RSNA in a number of roles, including as third vice president from 2013 to 2014 and as co-chair of the Bolstering Oncoradiologic and Oncoradiotherapeutic Skills for Tomorrow (BOOST) Program. At RSNA 2009, he delivered the Annual Oration in Radiation Oncology, “Genetic Factors in the Diagnostic Imaging and Radiotherapeutic Management of Breast Cancer.” Dr. Haffty was named RSNA Outstanding Educator in 2013. He has served on the RSNA Board of Directors since 2014.

In addition to having a busy clinical practice, Dr. Haffty has served in many other leadership positions. He has been on numerous national committees related to research and education in breast cancer and radiation oncology. He served as president of the American Board of Radiology, American Society for Radiation Oncology and the American Radium Society.