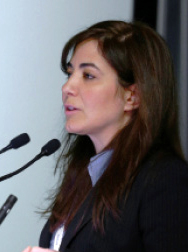 An imaging genomic map that links MR imaging traits with gene and microRNA (miRNA) expression profiles in patients with glioblastoma multiforme (GBM) was presented at RSNA 2013.

Researchers sought to identify genomic correlates of an MR perfusion radiophenotype in order to find new genomic targets for treatment of GBM, the most common malignant brain tumor. GBM accounts for 52 percent of all brain tumor cases affecting functional tissue and 20 percent of all intracranial tumors. Between 12,000 and 14,000 new GBM cases are diagnosed annually, and the five-year survival rate for GBM is among the worst for human cancers.

“It’s a quite terrible diagnosis,” said Rivka Colen, M.D., of The MD Anderson Cancer Center in Houston. She noted that despite ongoing efforts, there has been little significant progress in GBM therapy over the years.

But the relatively new field of imaging genomics, which links specific imaging traits (radiophenotypes) to genomic profiles, has the potential to effect changes in the way GBM is diagnosed and treated, Dr. Colen said. Her question has been, “How can MR imaging help in the so-called genomics revolution?”

Dr. Colen and colleagues identified 30 patients from the Cancer Genome Atlas (a publicly available genomic data site) who had both a genetic-expression profile and neuroimaging. Morphological image analysis was performed using Slicer 3.6, a free, open-source package for visualization and image analysis, while the perfusion maps were created with NordicICE, an image processing and analysis software application.

“We included patients with high versus low perfusion and we looked at—and were able to obtain—the micro RNAs and genes that were intimately and closely associated with high versus low perfusion,” Dr. Colen said. “Given that patients with high perfusion are said to have a more aggressive phenotype—to have increased angiogenesis, and usually have a greater propensity to recur and even have an increased amount of invasion and decreased survival rates—we identified the top gene hits that were associated with these glioblastoma and glioblastoma patients.”

The whole purpose is using MR—specifically MR perfusion—to screen for genomic targets that would be novel, clinically relevant and clinically meaningful, which can go on to commercialization to develop a genomic-based therapeutic,” Dr. Colen added.

Studies like the October 2011 PLoS One article, “Radiogenomic Mapping of Edema/Cellular Invasion MRI-Phenotypes in Glioblastoma Multiforme,” authored by Dr. Colen and colleagues, have validated the use of MR as a tool to discover novel and new genomic targets, she said. Now, instead of using conventional MR imaging characteristics, Dr. Colen and colleagues are using perfusion—a more advanced imaging modality.

Next, researchers need to determine how MR can play a role in genomic-based drug development, Dr. Colen said. “How can we play a role in imaging genomic biomarkers so that we can begin stratifying patients using MR, or stratify patients into clinical trials, and develop imaging-based endpoints in clinical trials that are reflective of the histological and genomic composition of the tumor?” Dr. Colen added. “Those are the next questions.”

Arthritic knees may be successfully treated with stem cell therapy, and the success of the treatment can be measured with MR T2-mapping, according to a pilot study presented at RSNA 2013.

The results suggest that treatment with mesenchymal stromal cells (MSCs) decreases pain, improves function and quality of life, and in some cases delays or even reverses cartilage damage. MSCs can differentiate into chondrocytes after injection.

Osteoarthritis is the most prevalent chronic joint disease, responsible for 2 percent of direct public health expenditures with much larger indirect costs due to disability and loss of productivity. Short of replacing the joint, no treatment today has succeeded in restoring cartilage. Typical treatments include anti-inflammatory drugs, analgesics and local corticosteroid injections.

The study represents a proof of concept for both stem cell therapy and the correlation of T2-mapping with clinical assessments.

“We wanted to find out if MR T2-mapping could be a useful technique for the follow-up of stem cell treatment,” said Joan C. Vilanova, M.D., Ph.D., associate professor of medicine at the University of Girona, Spain, who presented the results. He noted that most newer MR equipment is capable of performing T2-mapping, which can detect changes in water content in cartilage, as well as other biochemical and biophysical changes.

Twelve patients with clinical and radiologic diagnosis of osteoarthritis of the knee were treated with autologous mesenchymal stromal cells (MSCs) by intra-articular injection. There was an equal number of male and female patients and left and right knees. The average patient age was 49 and all 12 patients had failed to respond to conventional treatments.

After an initial clinical and MR assessment, patients had MSCs harvested from their bone marrow, cultured and injected into their knees. There were no serious adverse events from the injections, and post-implantation pain, reported by half the patients, responded well to ibuprofen and resolved within one to six days.

Clinical outcomes, including assessments of pain, disability and quality of life were followed for a year. Cartilage assessment was performed using MR T2-mapping at 88 pre-determined anatomical regions before treatment and at 6 months and 12 months after treatment. T2 relaxation values were determined in each region of the knee. T2 relaxation time is sensitive to both changes in cartilage hydration and orientation of collagen fibrils. T2 relaxation time increases with osteoarthritis.

Participating patients had a 65 to 78 percent reduction in their level of pain, and smaller but still significant improvements in knee function and quality of life. Pain reduction during sports activity was even greater than pain reduction at rest. Analysis of the T2-mapped images showed consistent decreases in T-2 relaxation values.

The study is ongoing and has expanded to 70 patients, Dr. Vilanova said. He expects additional results to be available sometime this year. He cited two areas that need further study: the standardization of MR T2-mapping techniques and exactly how the MSCs work once they’re injected.

“We have not proved the mechanism of the benefit,” he said. “We need to study more joints over a longer follow-up period.”