Fewer women are assigned to a dense breast category when evaluated with advanced mammographic screening technologies compared to standard digital mammography, according to a new study published in Radiology.

Women with the highest level of breast density have an increased risk for breast cancer and are advised to discuss supplemental screening with their physician. Most states in the U.S. have passed legislation mandating that women be notified of their breast density and a federal law was just recently passed requiring the Food and Drug Administration (FDA) to oversee such notification.

Although digital mammography (DM) has long been the foundation of breast cancer screening, new imaging modalities are increasingly being used, including digital breast tomosynthesis (DBT) and synthetic mammography (SM).

In this retrospective study, researchers analyzed data from 24,736 women who underwent mammography screening at the Hospital of the University of Pennsylvania (HUP) between 2010 and 2017. Data collected included the breast density category assigned at the time of the screening using the standardized BI-RADS system, race, age and body mass index (BMI). The study population was 46 percent white and 54 percent African-American (mean age 56.3 years).

“Major strengths of our study were the size of our sample and the diverse patient population, which was approximately half white and half African-American,” said Aimilia Gastounioti, PhD, lead author and research associate in the Radiology Department at HUP’s Perelman School of Medicine.

“We observed an overall trend of downgraded breast density when imaging was performed with either DM/DBT or SM/DBT compared with DM alone,” Dr. Gastounioti said. “These effects were more prominent among African-American women and women with higher BMI.”

Compared to standard DM imaging, the odds of a high-density assessment were reduced by 31 percent and 57 percent respectively when mammographic imaging was performed with DM/DBT or SM/DBT. The odds of receiving a high breast density assignment after SM replaced DM were reduced by 38 percent.

“Our findings may have direct implications for personalized screening since breast density assignments, which often drive recommendations for supplemental screening, may vary greatly by modality, race and BMI,” Dr. Gastounioti said.

She added that further research is needed to determine whether BI-RADS guidelines need to be adjusted for new imaging modalities. 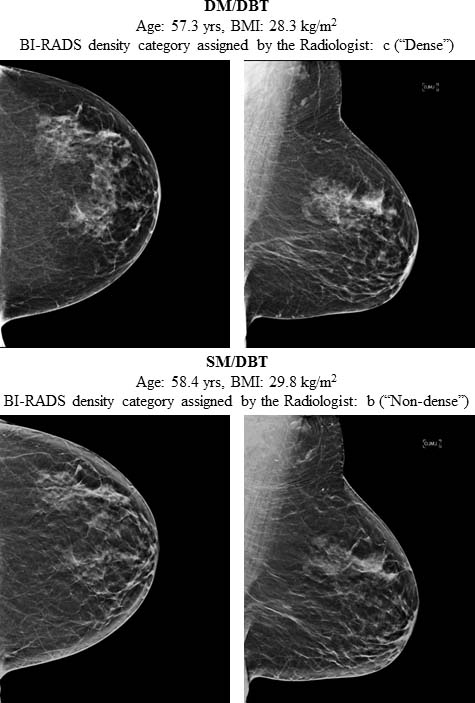