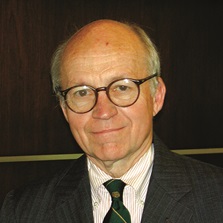 RSNA dedicates the 106th Scientific Assembly and Annual Meeting Program to the memory of Robert E. Campbell, MD, an esteemed radiologist and compassionate teacher who dedicated his career to improving the profession.

A stalwart member of RSNA, Dr. Campbell served as the RSNA Board of Directors liaison for education. In this role, he used his expertise and commitment to radiologic education to provide direction for the scientific program and exhibits for several annual meetings. He also served as chair of the RSNA Education Council and Nominating Committee. In 1989, Dr. Campbell served as RSNA president.

Dr. Campbell was instrumental in creating the RSNA R&E Foundation and his legacy continues to make a significant impact on the radiology community and on improved patient care. He served as chair of the R&E Board of Trustees, was chair of the Individual Giving Subcommittee during the R&E Foundation’s Silver Anniversary Campaign and was also chair of the Fund Development Committee. For his dedication and significant contributions to the field, he was awarded the RSNA Gold Medal in 1993. He received the American College of Radiology gold medal in 2006.