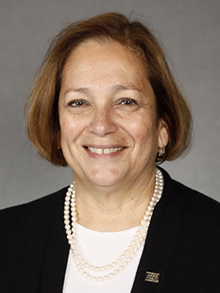 An expert in the field of breast imaging, Dr. Jackson is the executive director of the American Board of Radiology (ABR), a position she has held since 2014. She previously served on ABR’s board of trustees from 2001 to 2010. Dr. Jackson received her medical degree in 1978 from the Indiana University School of Medicine, and completed her residency at the Indiana University Medical Center in 1982. Dr. Jackson is the Eugene C. Klatte Professor Emeritus and has had numerous academic appointments at Indiana University School of Medicine over the years, including lecturer, professor and chair of the Department of Radiology and Imaging Sciences.

As president, Dr. Jackson will develop programs and initiatives that support RSNA’s mission to promote excellence in patient care and health care delivery through research, education and technologic innovation.

“The RSNA annual meeting is the leading forum for the introduction of medical imaging technologies, and the increasingly international attendance at the meeting allows people from all over the world to share knowledge and ideas,” Dr. Jackson said. “RSNA continues to grow as a world leader in informatics and has become a critical convener for artificial intelligence, machine learning and deep learning. While the focus of my career has been predominantly in education, I plan to work hard to continue to advance RSNA in all of these areas.”

The recipient of numerous honors throughout her career, Dr. Jackson is a fellow of the ACR and has received the gold medals of the IRS, SBI and ACR. The Valerie P. Jackson Education Fellowship also recognizes her work with ACR. Dr. Jackson delivered the Annual Oration in Diagnostic Radiology, “Screening Mammography: Controversies and Headlines,” at RSNA 2002.